Excerpts from an INTERVIEW WITH GRETTA BYRNE, Archaeologist.

Q: WHAT WERE YOUR FIRST IMPRESSIONS ON FIRST COMING TO CÉIDE FIELDS?

A: GRETTA:
“Many years ago when I was a student, I took the train from Dublin and travelled across to the west of Mayo. I had brought my bicycle on the train and I cycled out from the station at Ballina along the coast road towards Belderrig. After many miles, I came to the area where I expected Céide Fields to be. There was certainly a fabulous view over the Atlantic and a rocky coastline – but there were no fields to be seen. The thought crossed my mind that I could be lost.”

Q: WERE YOU CONCERNED AT THIS POINT?

A: GRETTA:
“There was nobody to ask directions from (and I had seen very few cars during the journey), so I just carried on cycling to the nearest village, Belderrig. I needn’t have worried though because there I met the rest of the team who were to be involved in the excavation at Céide.”

Q: DURING THE INITIAL STAGES OF EXCAVATION, DID YOU FIND ANY ARTIFACTS?

A: GRETTA:
“After two weeks, we discovered flints. This was very exciting – kneeling down and holding an arrowhead or knife. I really felt a connection with that person who had last held it in their hand thousands of years ago! We went on to find a great number of these.”

Q: DID YOU GAIN ANY INSIGHTS INTO WHAT THESE ANCIENT PEOPLE WERE LIKE?

A: GRETTA:
“I remember us finding three stone chambers or rooms and at the end of that day, after everyone had gone, I stayed back to make a drawing of the stone wall construction before I left the site. Then I noticed a little stone in between all the bigger ones that made up the wall. On looking closer, I could see that it was a perfect match for that space. I realised then that someone had gone to the time and trouble to find exactly the right stone to fill that gap – possibly from a pile of stones they were working from nearby. It gave me an insight into how meticulous that person was nearly six thousand years ago.”

Q: WHAT PROMPTED YOU TO BECOME AN ARCHAEOLOGIST?

A: GRETTA:
“My background was initially in history and geography at college. But before this, back at school, I remember our teacher telling us about “dolmens”. I used to think how did my teacher know what a dolmen was – and that an ancient king was buried there? These thoughts spurred me on to be more knowledgeable on the subject myself.”

Q: WHAT’S IT LIKE NOW, WORKING HERE EVERY DAY AT CÉIDE FIELDS?

A: GRETTA:
“Although there is still much work cataloguing and researching artifacts during my daily routine of running of the Visitor Centre, there is also a certain magic here – in addition to the scenic coastline – that you can actually feel! After many years here at Belderrig and Céide Fields, I regularly see skies, cloud formations and colours which defy belief and seem almost unreal at times. This, coupled with the priviledge of working with a great team here, is further enhanced by the great rapport we have always had with the people of Belderrig” 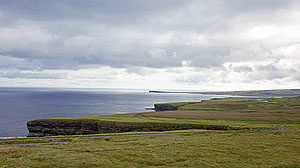